skip to main | skip to sidebar

Good friend Hammon Buck of Plants Unlimited sends out some very nice gardening information and this recent post came to my attention so I thought I would pass it on to you. This is extremely topical and VERY good advice for us gardeners in Skillin's Country. Plants Unlimited is a terrific garden center based in Rockport Maine. Hammon and I talk quite often and I always learn something about gardening and garden center business when we do speak. I hope he benefits some as well. Plants Unlimited is always worth a visit and they can be found at http://www.plants-unlimited.com/ and also at 629 Commercial Street (Route 1) in Rockport ME. Any comments I make are shown in italics:

"Prune many flowering shrubs and trees now while they are still dormant. Be aware that if certain varieties (forsythia, rhodys, lilacs and other spring flower plants) are pruned now, you might lose your spring flowers. The buds on plants are swelling and we prune now because they are full of energy and bounce back quickly. Also, it's so much easier to see the plants form without leaves obscuring your view. First, remove any dead branches or tips, then remove interior branches that cross through the plant - this "opens" the interior up for more light and air. Also remove branches that are rubbing together. Finally, you can prune to improve the symmetry of the tree by removing longer erratic branches. Use sharp pruners, loppers or saws as needed.

Larger branches on trees often require heavier duty tools than hand pruners. Folding saws, pole pruners or in extreme pruning, chain saws, might be needed. The branches should be cut close to the trunk (but not too close) and on an angle. Larger branches often require an undercut so that the weight of the falling branch does not rip away tree bark when it falls. Also, cut larger branches in sections to avoid weight damage."


Check out our pruning class this Saturday at 10 AM and 2 PM at Skillin's Falmouth! This will be a great class. Call us at 781-3860 for reservations OR contact us at skillins@maine.rr.com!

"It's a great time to prune rose bushes too, while they are still dormant. Remove any damaged or dead canes and crowded or crossed stems. Then, shorten undamaged canes in order to shape the plant. A good general tip for pruning most plants is to select buds that will grow outward (they are on the outside of the stem) and cut the branch slightly above this bud. This forces the plant to grow outward, avoiding growth toward the inside which only leads to rubbing branches and congested plant form. " 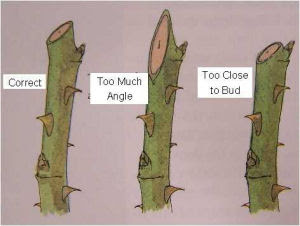 Damping-off of indoor seedlings is a fungus disease that is the downfall of many folks who start their seedlings indoors. Damping-off is the single term used to describe underground, line, or crown rots of seedlings due to unknown causes. The term actually covers several soil borne diseases of plants and seed borne fungi. Damping-off can be prevented by using sterilized, well drained soil and containers with good drainage. Other preventative measures are avoiding overcrowding, over fertilization which cause plants to grow to quickly and too crowded and good air circulation. Do NOT allow your seedlings to become too moist and avoid watering late in the day or on cloudy days when water can't dry off the foliage quickly. Fungicides can be applied as a last resort, but will NOT be needed with good cultural practices. Other natural things you can do are apply milled sphagnum moss or cinnamon on the soil surface after seedlings are sown. Also mist the seedling once of twice a day with water containing either chamomile or clove tea."
"If your rhubarb has become thin and less productive, it's time to rejuvenate it. As soon as you see buds, dig up the plant clump and divide it. Replant these clumps with cow manure or any other high nitrogen fertilizer (I would actually plant the divided clumps with a good dose of Plant Tone by Espoma and then water several times with Neptune's Harvest Fish and Seaweed fertilizer). Continue to feed a few times through the summer with the fertilizer. Do not harvest any this year. This allows the plant to grow vigorously for next year. Generally, you should divide rhubarb every three years or so. "
Late blight caused by Phytophthora infestans – a very destructive and very infectious disease – killed tomato and potato plants in gardens and on commercial farms throughout the eastern U.S. during 2009. Late blight is the same disease that caused the Irish Potato Famine in the 1840s. While late blight occurs at some locations in the Northeast each year, the occurrence of late blight in 2009 was different compared to most seasons. In 2009 infected plants were distributed through large local retail stores throughout the region (Ohio to Maine) during June, and outbreaks were reported over this entire region by early July. Never before had such an extensive distribution of infected plants occurred, especially so early in the season. The early introduction combined with the abnormally cool, wet growing season as well as the exceptionally contagious nature of the disease during cool, rainy, windy weather resulted in a disastrous year for farmers and gardeners. The following are some frequently asked questions about this disease and what home gardeners can do to prevent problems this year.

I think I had late blight on my tomatoes last year. Will it overwinter in my garden?

Tomatoes will not carry late blight over the winter, because freezing kills the whole plant. 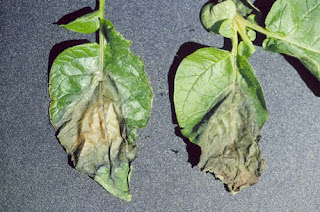 (tomato late blight)
Will seed from any tomatoes left in the garden last year carry over the disease?

Tomato seed, even from fruit that was infected with late blight, will not carry the pathogen, so no need to worry about the tomatoes left behind in the garden or compost pile.

No, late blight will not survive on tomato stakes and cages.

I grew potatoes last year. Can late blight overwinter on potatoes I may have left in the garden?

Potatoes that freeze or fully decompose will not carry the pathogen over winter. However, the biggest threat for overwintered disease in New England is on potatoes that might come up this year. In the spring, inspect last year’s potato plot and any compost or cull piles for volunteer potato plants. If you find potato plants, pull them out and put them in the trash or destroy them. If tubers were infected and survive, then the late blight pathogen could grow upward from the tuber, infecting the stem and producing spores when weather conditions are favorable. These spores could then disperse to other tomato and potato plants.

Is there anything else I can do to prevent late blight this year?

Yes. Late blight is not seedborne (however, it is tuber-borne in potato), so tomato plants started from seed locally (in the Northeast) will be free of the disease. Growing your own tomato transplants from seed or purchasing transplants that were started here in the Northeast from seed will ensure a healthy start to the season for you and local farms.

Also, purchase certified, disease-free seed potato from a reputable source. Seed potato grown in the Northeast is less likely to carry the disease. Examine your seed potatoes and plant only firm, blemish-free tubers.

I have spots on my tomato plants that show up in June or July every year. Could this be late blight?

Probably not. In addition to late blight, each year tomatoes become infected with early blight and Septoria leaf spot, which look very similar to late blight symptoms. If you have problems with early blight each year, consider growing tomato plant varieties that are resistant or tolerant to early blight. Also frequent early sprayings with a natural fungicide like Seranade or a disease preventer product like Vaccinate will help reduce the chances for early blight. Also feed your tomatoes with Tomato Tone by Espoma or liquid feed with Fish and Seaweed Food by Neptune's Harvest. These all natural foods contain good dosages of calcium which helps to prevent early blight, leaf spot and blossom end rot on tomatoes.